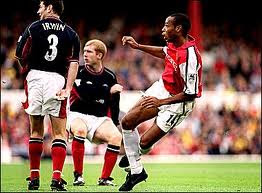 On 1 October 2000, Arsenal striker Thierry Henry raised his profile with a stellar goal against Manchester United.

Henry had already established himself as a top class scorer the previous season, his first in England, by providing 26 goals in 47 appearances. But although there were some excellent strikes, nothing compared to the one he launched against Manchester United in October 2000.

United, the defending Premier League champions, were sitting at the top of the table when they visited Highbury, while the Gunners were three points back in fourth place. After half an hour, the match was scoreless when Henry struck. Positioned about 20 yards out with his back to the goal, he received a pass from defender Gilles Grimandi. With United defender Denis Irwin closing in, Henry's first touch flicked the ball into the air. Then, in one motion, he pivoted toward the goal and shot the ball.

It followed a high arc, curling across the goal and falling into the top right corner. United goalkeeper Fabien Barthez was caught completely off-guard and was unable even to make a play for the ball. It turned out to be the match winner, though United repeated as champions with Arsenal a distant second.