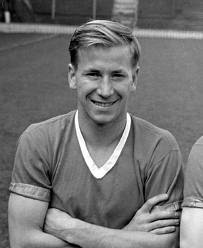 On 6 October 1956, Bobby Charlton started his record-setting Manchester United career in style, scoring a brace on his debut against Charlton Athletic.

The striker had been with the club since 1953, rising up through the youth ranks before signing a professional contract in 1954. He was just five days shy of his 19th birthday when manager Matt Busby gave him his inaugural start for the first team.

Played before a crowd of 41,439 at Old Trafford, the league contest matched first-place United against Charlton Athletic, who were dead last in the table. So it was a bit shocking when the visitors took the lead midway through the first half. But the lead last only a minute, as forward Johnny Berry quickly equalized for United. Then young Bobby Charlton struck twice before the break (32', 37') to put the hosts up 3-1.

They were the first of his record 249 goals for the club in a career that spanned 17 seasons. His 758 appearances (only 2 of which were as a substitute) also set a club record, though that one was broken by current record holder Ryan Giggs in 2008.

The match ended as a 4-2 United victory, with United's final goal coming from forward Liam Whelan.
Posted by Brian Seal at 12:01 AM