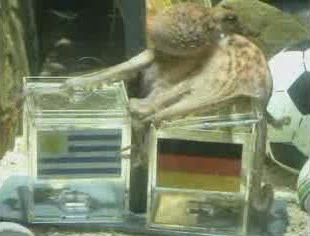 On 26 October 2010, Paul, the world's most famous psychic octopus, died of natural causes. He was two and half years old.

Housed at the Sea Life Center in Oberhausen, Germany, Paul first rose to prominence by picking his host country to win all of their matches at the UEFA Euro 2008 tournament. He chose the winner by selecting food from one of two clear plastic boxes placed in his tank, one box bearing the German flag and the other with that of Germany's opponent--the country whose flag was on the box containing the food he selected was predicted to be the winner. For that tournament, he successfully picked Germany as the winner in four out of six matches.

Paul used the same methodology for Germany's matches in the 2010 World Cup. Unlike the previous tournament, however, Paul did not predict Germany to win every match, correctly calling losses to Serbia in the group stage and Spain in the semifinals. But he got every other match correct, including Germany's win over Uruguay in the third-place match.

With Germany eliminated, Paul's handlers asked him to pick the winner of his first match that didn't involve the Germans--the final between Spain and the Netherlands. Again, Paul chose correctly, tipping Spain to lift the trophy. That result meant that he accurately selected the winner in all eight predictions for the tournament. With a 50/50 chance of guessing each winner, the probability of Paul's predictions was 256 to 1.