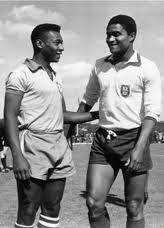 On 11 October 1962, Pelé won the battle of superstars, outdoing Eusébio with a hat-trick to lead Santos over Benfica for their first Intercontinental Cup.

The contest matched Santos, the reigning Copa Libertadores champions, against European Cup winners Benfica. In the first leg, played at the Maracaña on 19 September, Pelé scored an 85th-minute match-winner with the final score of 3-2.

In the second leg, played in Lisbon's Estádio da Luz, the striker picked up where he left off, opening the scoring in the 15th minute with a sliding tap-in from a low cross. Ten minutes later, he doubled lead with an impressive finish after avoiding two tackles, then blowing by a third defender.

Santos stretched their lead to five after a goal from Coutinho (48'), another from Pelé (64'), and one from Pepe (77') before Benfica finally got on the scoresheet with an 85th-minute goal from Eusébio. Four minutes later, they cut the margin to 2-4 after a strike from Joaquim Santana (who had provided both of their goals in the first leg). But it was too little, too late for the Portuguese side as they fell to Santos, 2-5.

It was the second time Benfica had conceded five goals in the Intercontinental Cup--they lost 5-0 to Peñarol in the second leg the year before, then fell 2-1 in the play-off. Santos had better luck in the competition, repeating as champions in 1963 by beating AC Milan.