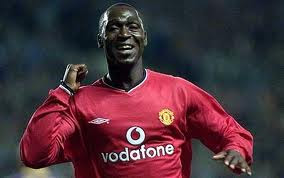 On 15 October 1971, striker Andy Cole was born in Nottingham, England. He went on the become the second-highest goalscorer in Premier League history.

Cole began his professional career in 1989 with Arsenal, but played for a total of twelve clubs before his retirement in 2008. He stayed the longest at Manchester United where he scored 93 goals in 195 league appearances between 1995 and 2001. While there, he won five league titles, two FA Cups, and the Champions League.

A prolific scorer, his best season was with Newcastle United in 1993-94, when his 34 goals made him the league's Golden Boot winner. He lost the title the following year to Alan Shearer, who went on to win it three straight times--the last with Newcastle--and is the only player ahead of Cole on the league list of all-time goalscorers.

Cole left Old Trafford in December 2001 for Blackburn and won the League Cup the following season. After spells at a number of other clubs in England, he ended his career with Nottingham Forest in October 2008. Along the way, he tallied 187 Premier League goals, second only to Shearer's 260.

In 2000, several press outlets reported that Cole had asked to be called by his full first name, "Andrew," rather than the shortened "Andy," prompting a surprisingly vigorous discussion. He later claimed, however, that he had been misquoted and had instead just answered a reporter's question about what his full name was.


the best of andy cole by Chdoulaaa
Posted by Brian Seal at 12:01 AM