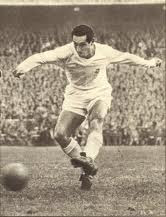 On 21 October 1933, Real Madrid striker Francisco Gento was born in the Guarnizo district of Cantabria in northern Spain. By the time he retired, he was the club's all-time appearances leader and he remains the only man to win six European Cups.

An outside left forward, he started his professional career in 1952 with Racing Santander, but moved to Real Madrid for the 1953-54 season. He started slowly there, with no goals in 21 appearances that season, but earned his first silverware as Real Madrid won the league for the first time in eleven years.

The honors flowed regularly after that, with another league title in 1955 and the first of five consecutive European Cups in 1956. In 1957, he scored in Real's 2-0 win over Fiorentina (video below), then provided the 107th-minute match-winner against Milan in 1958. After the five-time streak, Real returned to the final on the losing side in 1962 and 1964, then won it for a sixth time in 1966. Gento, who captained the side in 1966, was the only person to play for Real Madrid in all six wins, making him the only person in history with six European Cup titles to his name.

Upon his retirement in 1971, he had made a total of 599 appearances for Real, making him the club's appearances leader at the time, though his tally has since been surpassed by four others. he moved into management briefly--for Castilla, Castellón, Palencia, and Granada--before becoming a European ambassador for Real Madrid.