1 January 2005 - In Fairness, They All Were Probably Still Hungover 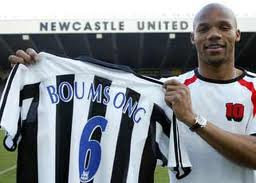 On 1 January 2005, Newcastle bought defender Jean-Alain Boumsong from Rangers in a deal widely regarded as one of the worst January transfers in history.

A French international, Boumsoung had played for Le Havre (1997-2000) and Auxerre (2000-04) before moving to Rangers on a free transfer in the summer of 2004. Although he signed a 5-year deal with the Glasgow club, his strong performances there attracted the interest of Newcastle manager Graeme Souness, who lodged an £8M bid that December, with the clubs finalizing the deal on the first day of 2005.

Although his time at St. James' Park started well, he struggled in the 2005-06 season, often shouldering the blame for defensive lapses that led Newcastle to concede 42 goals en route to a seventh-place finish. By the end of that season, new manager Glenn Roeder, who had replaced Souness in February 2006, sold the center back to Juventus for just £3.3M, taking a loss of almost £5M on the deal (though the agreement included performance-incentives).

Boumsong stayed with Juventus for one season, then played three seasons for Lyon before joining Panathinaikos, his current club, in July 2010. For his time on Tyneside, a 2008 Times poll rated him the Premier League's worst January transfer. Since then, however, polls have dropped him down behind more recent transfers, including Andy Carroll's £35M move from Newcastle to Liverpool in 2011 and Chelsea's £50M purchase of Fernando Torres from Liverpool.