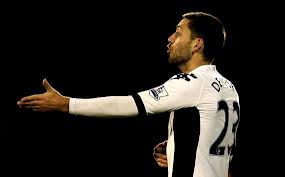 On 21 January 2012, Clint Dempsey became the first American to score a hat-trick in the Premier League, lifting Fulham to a 5-2 win over Newcastle.

A striker/midfielder, Dempsey--nicknamed "Deuce"--was in his sixth year with the London club, having joined them in January 2007 in a deal worth a reported £2M. He quickly established himself as a regular in the starting eleven, making over forty appearances in each of the next five seasons.

Midway through the 2011-12 season, Fulham were struggling in the bottom half of the table while Newcastle were challenging for a European spot. Newcastle won the first meeting 2-1 at St. James' Park back in August. So the odds were stacked against Fulham in the return fixture at Craven Cottage.

The match went according to form in the first half, with the visitors going up 0-1 after a Fulham error led to a 43rd-minute goal from Newcastle midfielder Danny Guthrie. But the hosts roared back in the second half, drawing level with a penalty kick from Danny Murphy in the 52nd minute, then going ahead with a pair of Dempsey goals (59', 65'). Another Fulham penalty, scored by Bobby Zamora in the 68th minute, stretched the lead to 4-1.

Newcastle's Hatem Ben Arfa closed the gap to 4-2 in the 85th minute, but Dempsey completed his hat-trick four minutes later to restore the three-goal lead and end the day at 5-2.

Dempsey went on to score a career high 23 goals in all competitions that season before moving to Tottenham in August 2012 for a reported fee of around £6M.
Posted by Brian Seal at 12:01 AM