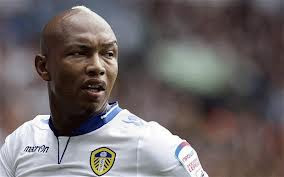 On 15 January 1981, Senegalese striker El Hadji Diouf was born in Dakar. A talented but controversial player, he has spent time with nine different clubs across France, England, and Scotland.

He began his professional career with Sochaux in 1998, followed by quick moves to Rennes (1999-2000), and Lens (2000-02). At the latter, he scored 18 goals in 54 league appearances, which--combined with a strong showing for Senegal at the 2002 World Cup in which he helped the team to a quarterfinal berth--attracted the interest of Liverpool manager Gérard Houllier, who signed him that summer for £10 million.

Diouf failed to recapture his previous form and his time at Anfield was overshadowed by a March 2003 UEFA Cup incident in which he spat at a Celtic supporter. At the end of the 2003-04 season--in which Diouf failed to score a single goal--Liverpool sent him on loan to Bolton. There, he began scoring goals again and Bolton made the move permanent in 2005.

After four seasons with Bolton, he moved again, spending time with Sunderland (2008-09) and Blackburn Rovers (2009-11). But his scoring touch deserted him again and he spent the last half of the 2010-11 season on loan in Scotland with Rangers. All along the way, he developed a reputation for being hotheaded, with frequent bookings.

He moved back to England in the summer of 2011 to play for Doncaster Rovers, then joined Leed United in 2012 after Doncaster's season ended in relegation.