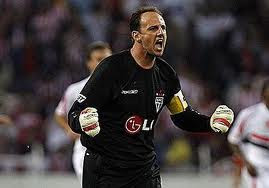 He started his professional career in 1990 with Sinop, but moved to São Paulo in 1992 and has remained there ever since, making 1,050 appearances through the 2012 season. He got off to a great start with the team, winning the Copa Libertadores, the Intercontinental Cup, the Recopa Sudamericana, and the Supercopa Sudamericana in 1993, though he himself made only fifteen total appearances that year.

Apart from being an outstanding keeper, however, Ceni has been an excellent goalscorer, with a world-record total of 107 goals in all competitions through 2012, always through free kicks and penalty kicks. His most prolific year was 2005 when he scored a total of 21 times, including ten league goals.

Going into the 2013 season, the 40-year old Ceni remains São Paulo's starting goalkeeper and is also the club's captain.