31 December 1921 - Playing With A Passion Undimmed 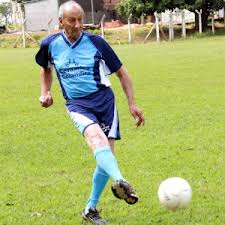 On 31 December 1921, Tércio Mariano de Rezende, the Guinness record holder as the world's oldest footballer, was born in Brazil.

A right back, Mariano started playing for his local club, Goiandira Esporte Clube, in 1973 when he was 52 years old. He was still playing there in 2008 when, at the age of 87, the Guinness Book of World Records listed him as the world's oldest footballer.

A farmer who walks 10 kilometers every morning, Mariano rejected suggestions that he was too old to continue, saying "as long as I have legs, I will play." And even though recently sidelined by injuries, including a dislocated shoulder and surgeries to his neck and back, he continued to play as late as October 2012 at the age of 90.