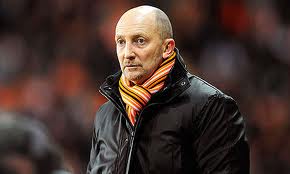 On 27 January 2011, the Premier League fined Blackpool £25,000 for fielding a weakened team against Aston Villa earlier that season.

The match in question was played on 10 November. Blackpool, playing in their first top-flight season since 1971, had risen to 11th in the table after a win over West Brom and a draw with Everton over the previous week. With upcoming games against West Ham and Wolves, who occupied the table's last two spots, Blackpool manager Ian Holloway (pictured) made ten changes to his side for the Villa match, resting key players.

Holloway acknowledged that the line-up was not his strongest, but defended his decision, saying "We've got four games in twelve days and the lads I've played every week are struggling to keep up the level." Even with the changes, Blackpool nearly got a result, but fell 3-2 (they then got a win and a draw in their next two games).

Afterward, the Premier League accused Blackpool of deliberately fielding a weakened side in contravention of league rules. An offended Holloway threatened to resign in the league levied any fine against his team.

Nevertheless, on 27 January, the Premier League announced its decision to fine the club £25,000. Blackpool chairman Karl Oyston labeled the decision "unjust" and said they would appeal, but they ultimately decided against it. Holloway remained with the club, who finished the season in nineteenth and were relegated.
Posted by Brian Seal at 12:01 AM