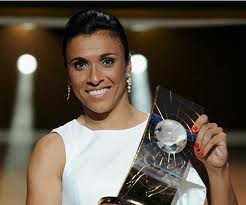 After finishing third in voting for 2004 and second in 2005, the Brazilian forward finally won her first World Player of the Year award in 2006 while playing for Umeå in Sweden, then repeated as winner in 2007 and 2008. In 2009, she moved to the US to play for the Los Angeles Sol and finished the season as the league's top scorer, leading to her record fourth World Player of the Year award (Lionel Messi matched that record with a fourth award of his own in 2012).

When Los Angeles folded in January 2010, she joined FC Gold Pride, who selected her with the first pick in  the WPS supplemental draft. She repeated as the league's top scorer that season and helped Gold Pride win the WPS Championship with a 4-0 win over Philadelphia on 26 September. Just over two months later, she was named World Player of the Year for a fifth time, setting a new record.

She came close to extending the record in 2011 and 2012, but finished second in the voting for both years, first to Japan's Homare Sawa and then to the USA's Abby Wambach.
Posted by Brian Seal at 12:01 AM