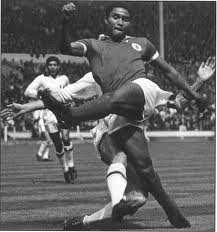 On 25 January 1942, Portuguese star forward Eusébio, the 1965 European Footballer of the Year, was born in what is now Mozambique.

At the time of his birth, Mozambique was under the control of Portugal and was known as Portuguese East Africa. Eusébio grew up there and signed his first contract there in 1957 with his neighborhood club, Sporting de Lourenço Marques, and remained there until he signed with Benfica in December 1960.

He quickly made his mark at his new club, scoring a hat-trick in his first appearance, a May 1961 friendly against Atlético Clube de Portugal. He went on to score a total of 473 goals for them in 440 appearances across all competitions while winning eleven league titles, five Portuguese Cups, and the 1962 European Cup, scoring the last two goals in Benfica's 5-3 win over Real Madrid.

In the 1964-65 season, he scored a career-high 48 goals, leading to his European Footballer of the Year award. He remains the club's all-time appearances and scoring leader.

He left Benfica in 1975 and spent time with several different clubs in the United States, Mexico, and Portugal before retiring in 1980.