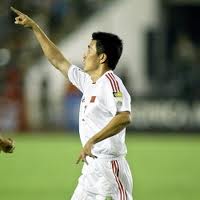 On 26 January 2000, China matched what was, at the time, the world's biggest margin of victory in international football, beating Guam 19-0. That record didn't last long, though.

China had held the record for several years after beating the Maldives 17-0 in 1992, but it finally fell when Tahiti got an 18-0 win over American Samoa in June 2000, then Iran pushed the record to 19-0 with a November 2000 win over Guam in a World Cup qualifier. So the Chinese were motivated to reclaim the title when they began their Asian Cup qualification campaign in January 2000.

On the first day for their qualification group, China beat the Philippines 8-0, while Guam lost to Vietnam 11-0. That set the stage for China to make a run at the top score, and run they did.

Playing at the Thong Nhat Stadium in Vietnam's Ho Chi Minh City, striker Hao Haidong (pictured) got the ball rolling with the opening goal in the second minute, the first of four he scored on the day. He was joined on the scoresheet by Qu Shengqing (5), Su Maozhen (3), Yao Xia (2), Li Weifeng, Shen Si, Qi Hong, and Li Tie before Ma Mingyu scored the final goal with ten minutes remaining.

Unfortunately for the Chinese, however, their reign as joint record holders was short, as about three weeks later, Kuwait beat Bhutan 20-0 in another Asian Cup qualifier. Even that number did not hold up for long; Australia set the current record with a 31-0 win over American Samoa on 11 April 2001.
Posted by Brian Seal at 12:01 AM