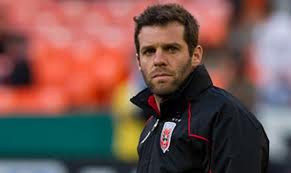 A tenacious midfielder, Olsen joined DC United for the 1998 season after three years at the University of Virginia (where his first coach was then-DC manager Bruce Arena). He was named the league's Rookie of the Year as DC finished as runners-up to Chicago in the MLS Cup and won both the CONCACAF Champions League and the Copa Interamericana.

The following year he won the first of two MLS Cups and was the tournament's most valuable player. He won his second MLS Cup in 2004 and a US Open Cup in 2008. Injuries dogged his career, however, forcing his retirement in 2009 after 221 league appearances.

His retirement was short-lived as he returned to DC United in 2010 as an assistant to new manager Curt Onalfo. But a poor start to the season led the club to sack Onalfo in August 2010 and appoint Olsen as the interim manager, then confirmed his permanent status that November, making the then-33-year old the league's youngest manager.

After a difficult finish in 2010 and another rough season in 2011, Olsen guided the team to an improved record in 2012, reaching the MLS playoffs for the first time in five seasons and making it all the way to the conference finals before falling to Houston.