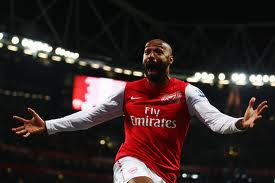 Henry played for the Gunners from 1999 to 2007, making 369 appearances and scoring 226 goals. While there, he won two league titles (including the undefeated "Invincibles" run in the 2003-04 season) and three FA Cups before leaving for Barcelona in a deal worth €24M. He continued to collect silverware in Spain, with a record six-trophy haul in 2009 that included the La Liga title, the Copa del Rey, and the UEFA Champions League.

Arsenal, however, had failed to win any trophies after Henry's departure. Halfway through the 2011-12 season, as a rocky start left them struggling to capture a Champions League qualification spot, they looked to Henry, who had by then moved to the New York Red Bulls.

He joined them in January for a two-month loan. On 9 January, he made his first appearance, coming on as a substitute to score the only goal in a FA Cup win over Leeds United. He went on to make another six appearances and scored again in his final match, a 1-2 away win over Sunderland, before returning to New York.

Rumors swirled in December 2012 of yet another return to Arsenal, but the move never materialized. Henry has said, however, that he would like to rejoin Arsenal in a coaching capacity after he retires from his playing career.