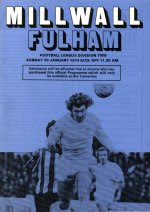 On 20 January 1974, English teams played league football on a Sunday for the first time.

The FA, along with several clubs and players, had expressed support for Sunday matches earlier in the season, hoping that the move would help improve declining attendances, but they faced a couple of substantial obstacles. The Sunday Observances Act, for one, barred the selling of tickets on Sundays. In addition, many in the public opposed Sunday football on religious grounds.

But by January 1974, attendances continued to decline, driven in part by a ban on floodlights that stemmed from the worldwide energy crisis, prompting the FA to approve the playing of four third-round FA Cup matches on Sunday, 6 January. In order to get around the Sunday Observances Act, the clubs sold programs, which were used instead of tickets to gain access to the games.

Those FA Cup matches drew large crowds, convincing the Football League to move forward as well using the same admission-by-program scheme. While some clubs--including all First Division clubs--declined to participate, citing religious reasons, that first league Sunday hosted a total of twelve matches, three each in Divisions Two and Three and six in Division Four. Nine of those games reported their biggest crowds of the season.

The first Sunday league goal was scored by Millwall's Brian Clark in their 1-0 win over Fulham.

Despite the success of Sunday games, opposition remained strong and it took several more years before Sunday football became a regular feature in the league.
Posted by Brian Seal at 12:01 AM