19 January 2010 - The Margin For Error Was Apparently Very, Very Small 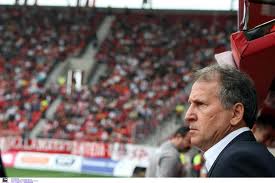 On 19 January 2010, Olympiacos sacked Brazilian legend Zico only eight months into his two-year contract as manager.

After starring as a playmaker for Flamengo and Brazil in the 1970s and '80s, Zico moved into management with Kashima Antlers in 1999. But he established his credentials as the manager of Japan from 2002 to 2006, winning the 2004 Asian Cup and guiding them through an impressive qualification campaign for the 2006 World Cup. He stepped down after a poor showing at the tournament itself, however.

Then came a brief but successful spell at Fenerbahçe from 2006 to 2008, followed by even shorter stints at Bunyadkor (2008) and CSKA Moscow (2009) before he moved to Olymipacos in September 2009.

At the time, only two games into the season, the team was in fourth place. Under Zico, they rose to the top of the table by the end of September and mostly remained there for the rest of the year on the strength of an undefeated run that saw them win eight of Zico's first ten games. But a loss in his eleventh, away to Aris Salonika, followed by another at home to AEK Athens, proved too much for club president Socrates Kokkalis. Even though Olympiacos got a win and a draw in their next two games, he moved to terminate Zico's contract.

Olympiacos went on to finish the season in second place, while Zico took some time off before managing Iraq from 2011 to 2012.
Posted by Brian Seal at 12:01 AM