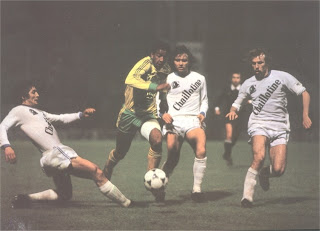 The streak began in June 1976 under manager José Arribas, in the last month of his 16-year tenure in charge of the club. On 4 June, Nantes managed a 1-1 draw with Nice, then won their only remaining home match of the season, a 1-0 victory over Nîmes on the season's last day.

Over the summer, Jean Vincent replaced Arribas and presided over the remainder of the unbeaten streak, staying with the club until 1982. During that time, the run extended to a Ligue 1-record 92 consecutive matches and included two league titles (1977, 1980) and one Coupe de France (1979). The streak-ending loss to Auxerre in 1981 likely cost Nantes another league title, as they finished that season in second, two points behind Saint-Etienne.