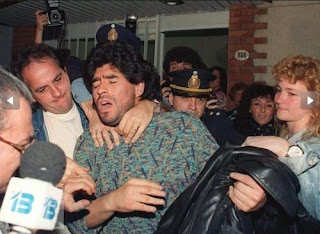 On 26 April 1991, police in Buenos Aires arrested Diego Maradona for possession of cocaine. It was one more twist in the spiraling descent of the Argentina star, who had just started serving a 15-month ban from Italian football.

Although he was already suffering from a cocaine addiction when he joined Napoli in 1984, he reached his greatest potential while at the club, winning two Serie A titles (1987, 1990) and the UEFA Cup (1989). Meanwhile, he shined on the international stage for Argentina, guiding them to the 1986 World Cup trophy while winning the Golden Ball at the tournament's best player.

But in March 1991, the Italian Football Federation suspended Maradona for 15 months after he tested positive for cocaine. He returned to Buenos Aires, but could not escape his troubles. On the morning on 26 April, police roused him from bed at his apartment and arrested him for possession of cocaine.

Maradona's ongoing problems proved too much for Napoli, who transferred him to Sevilla in 1992 at the completion of his suspension. His troubles continued, however, including a dismissal from the 1994 World Cup after a positive test for ephedrine and another arrest for cocaine possession in 1997. The latter effectively ended his playing career.

He returned to the sport in 2008 to manage Argentina's 2010 World Cup campaign, but his contract expired after the tournament and he is currently out of football.
Posted by Brian Seal at 12:01 AM