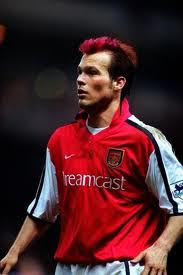 He started his professional footballing career with Swedish side Halmstad in 1994 after spending 12 years in their youth team. In five seasons there, he won both the Swedish Cup (1995) and the league (1997). His performances drew the attention of Arsenal, who set a Swedish transfer record when they signed him in 1998 for £3 million. Reportedly, manager Arsène Wenger signed him based solely on his performance in a televised match against England and had not seen him in person.

At Arsenal, Ljungberg quickly established himself as a fan favorite due to his frenetic style of play that helped the club to two league titles (2002, 2004) and three FA Cups (2002, 2003, 2005). While there, he signed as an underwear model with Calvin Klein, serving as the face of one of their most successful ad campaigns.

A series of injuries led to his departure from Arsenal in 2007. After a brief spell with West Ham and a short time away from football, Ljungberg moved to the US to play for the Seattle Sounders in 2008. Free from injury, his performances led to his being named to the 2009 MLS All-Star team and, after a short spell with the Chicago Fire, his return to the UK to play for Celtic, his current club.

Internationally, he made 75 appearances for Sweden between 1998 and 2008, playing in the 2002 and 2006 World Cups. He captained the team for their Euro 2008 campaign and drew praise as their best player on the tournament despite their early exit.