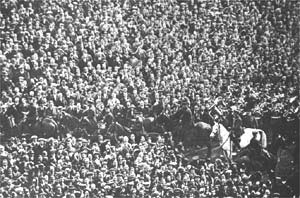 On 28 April 1923, Bolton Wanderers and West Ham met in the FA Cup Final. It was the first event ever held at the original Wembley Stadium.

The stadium had been built over the course of the previous year at a cost of £750,000 and was ready for business just four days prior to the Final. Approximately 300,000 people turned up for the match, far in excess of the stadium's capacity of 127,000.

Spectators spilled out of the terraces and onto the pitch before the match, requiring mounted police to clear the field for the game. The day's iconic image shows constable George Scorey on a grey horse parting a sea of supporters. His horse, Billie, appeared white on film, giving rise to the match's nickname as the White Horse Final.

The match itself was anticlimactic. Bolton went ahead in the second minute with a goal from forward David Jack. Jack's shot hit a spectator who was standing against the net, knocking him unconscious. Bolton forward Jack Smith doubled their lead in the 53rd minute and Wanderers held on for a comfortable 2-0 victory.