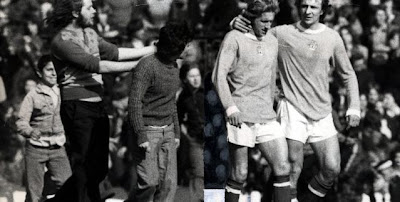 On 27 April 1974, Manchester City defeated Manchester United 0-1 at Old Trafford, securing United's relegation to the Second Division. The match's lone goal was scored by former European Footballer of the Year Denis Law, who had spent the previous eleven seasons with United before moving to City on a free transfer in the summer of 1973.

United entered the match in 21st position on 32 points, three points behind Birmingham City, who were sitting above the drop in 19th place. At that time, wins earned two points each and United, with two matches left to play, had a match in hand. Thus, in order for United to avoid relegation, they needed at least a draw against City and a Birmingham loss.

With less than 10 minutes to play, the match was scoreless. Then City pressed forward and the ball found its way into the United box where Law instinctively backheeled it into the net. Law's teammates rushed over to congratulate him, but he refused to celebrate, realizing that he had just sealed the fate of the club he loved. United's supporters invaded the pitch and the match was stopped. The scoreline held, though, 0-1 to City.

As it turned out, Birmingham won their last match, so United would have gone down even if they had beaten City. Nevertheless, the goal is remembered as the one that sent them down to Division Two. In any event, they didn't stay down long, earning promotion back to the top flight at the first opportunity.