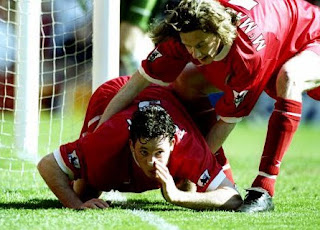 On 3 April 1999, Liverpool won the Merseyside derby over Everton 3-2 in a match best remembered for a provocative goal celebration.

Although Everton were sitting seven spots below Liverpool in the table and the two teams had played to a scoreless draw earlier that season at Goodison Park, the visitors stunned the home crowd with a goal from midfielder Olivier Dacourt after only 41 seconds. He unleashed a powerful volley from 30 yards out that skimmed the head of defender Steve Staunton and beat keeper David James.

But the lead did not last long. A trip by Everton's Marco Materazzi on Paul Ince led to a 15th-minute penalty kick, which Robbie Fowler converted with ease. Fowler, who previously had been accused of drug abuse by the Everton supporters, then raced to the goal line, dropped to his knees, and pretended to snort the white line in front of the visiting fans. Police soon stepped into the area to quiet the ensuing uproar.

Liverpool proceeded to win 3-2 after another goal from Fowler (21') and a one from Patrik Berger (82'), while Everton's Francis Jeffers (84') provided the day's last goal.

Afterward, Liverpool manager Gérard Houllier attempted to explain Fowler's celebration by saying the striker was really pretending to eat the grass, claiming it was a Cameroonian tradition learned from teammate Rigobert Song. The FA clearly disagreed, suspended Fowler for six matches (including time for another incident) and fining him £32,000. Liverpool also fined him an additional £60,000 for bringing the game into disrepute.