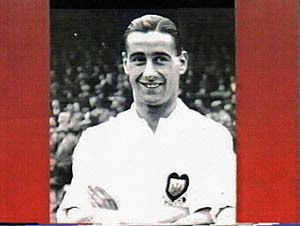 On 4 April 1936, Scotland claimed the British Home Championship with a late penalty kick against England at Wembley. And it took three tries.

Played before a crowd of 93,267, it was the last match of the tournament and the stakes were high; a win for either side would deliver the title, while Scotland could also win it with a draw. The hosts went ahead at the half-hour mark with a goal from striker George Camsell (playing in the seventh of his nine matches for England; he scored in all nine).

England held on desperately to the slim lead, but, in the 75th minute, captain Eddie Hapgood conceded a penalty. Scotland's 20-year old inside forward, Tommy Walker (pictured), volunteered to take the kick. He twice placed the ball on the spot only to see it twice blown away by the wind. With the stadium virtually silent, Walker again placed the ball, then coolly slotted it home.

The match ended as a 1-1 draw to give Scotland their 26th championship and first solely-held title since 1929.
Posted by Brian Seal at 12:01 AM