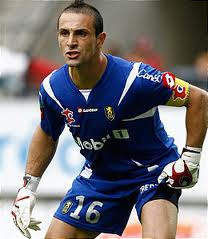 On 17 April 2004, Sochaux won their first trophy in 40 years, beating Nantes on penalties in the Coupe de la Ligue Final.

It was the second straight final for Sochaux, who had lost to Monaco the previous season, and the first one for Nantes. The teams exchanged a pair of early goals, with forward Grégory Pujol striking first for Nantes in the 13th minute, then defender Sylvain Monsoreau heading Sochaux level five minutes later. Nantes looked likely to regain the lead several times, but were repeatedly denied by Sochaux goalkeeper Teddy Richert (pictured), including one point-blank save against Nantes midfielder Frédéric de Rocha late in the match.

Locked at 1-1 after extra time, the game went to a penalty shootout. Still level after six kicks, Sochaux defender Maxence Flachez sent his attempt over the crossbar. The miss opened the door for Nantes' next kicker, goalkeeper and captain Mickaël Landreau, to seal the win. But he tried a simple chip that Richert saved with ease. After Sochaux captain Benoît Pedretti beat Landreau on the next attempt, Richert once again made a crucial stop, diving to his right to save Nantes' last shot and end the match as a Sochaux victory.