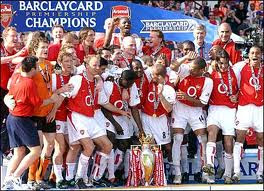 On 25 April 2004, Arsenal drew 2-2 with Tottenham at White Hart Lane. The point they earned was enough to clinch the Premier League title with four matches remaining.

The Gunners were near the end of an incredible season, having gone undefeated in the league. They started the day on 81 points, nine clear of second-place Chelsea and with a game in hand. Playing before a crowd of 36,097 at the home of their fierce derby rivals, Arsenal never looked in danger of losing the title.

They went ahead after only three minutes, as Thierry Henry recovered the ball from a failed Spurs corner, sped down the pitch and fed it to Dennis Bergkamp. The Dutchman delivered a precise cross for captain Patrick Vieira, who provided the final touch that put the ball into the net. Bergkamp started the attack for Arsenal's second goal in the 35th minute, beating the Tottenham defenders with a through ball to Vieira, who then gave it to Robert Pires for the finish.

Amid constant pressure from Arsenal, Tottenham fought back, cutting the deficit to one with a goal from Jamie Redknapp in the 63rd minute. Then, in stoppage time, Arsenal keeper Jens Lehmann fouled Robbie Keane, who converted the ensuing penalty kick to earn the draw.

The result put Arsenal ten points clear of Chelsea, who had lost that day to Newcastle and had only three games left. Arsenal drew two of their last four, but finished the season undefeated.