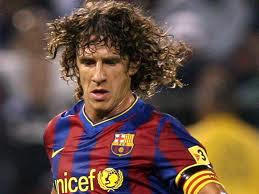 After starting his career with his hometown team, Puyol joined the Barcelona youth team in 1995 and has remained with the club ever since, earning promotion to the first team in 1997 under manager Louis van Gaal. When Puyol was 19, van Gaal encouraged him to get a haircut, but Puyol declined and his long curly hair has become a trademark.

Primarily used as a center back, Puyol currently has over 500 appearances for Barça and has captained the team since 2004. Under his leadership, they have won four league titles, two Champions League trophies, and one FIFA World Club Cup.

In 2000, he made his first appearance for Spain and was a key member of their victories campaigns in Euro 2008 and the 2010 World Cup. In the latter, he scored a rare goal to give Spain a 1-0 victory over Germany in the semi-finals, then helped hold the Netherlands scoreless as Spain won 0-1 in extra time.