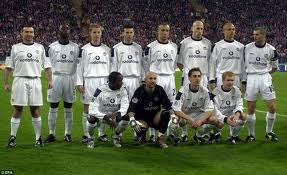 On 18 April 2001, Manchester United took a team photo of their starting XI--with a surprise twelfth person.

United were at Munich's Olympic Stadium for the second leg of their Champions League quarterfinal against Bayern Munich, having lost the first leg 0-1 at Old Trafford. As the starters gathered on the pitch for their pre-match photo, they were unknowingly joined by out-of-work laborer Karl Power (pictured at far left).

Power had snuck into the stadium disguised as a member of a television crew, then changed into the Manchester United away kit and walked out unchallenged onto the pitch for the photo. Some of the players noticed him (such as Roy Keane, standing at far right and looking at Power), but he managed to stay for the photo, then retreated into the stands to watch the match.

He claimed that he had spent two years planning the stunt and later pulled similar pranks, such as walking out with the English cricket team for a match, performing the haka before an English rugby match, and sneaking onto Wimbledon's Centre Court. In 2003, he received a lifetime ban from Old Trafford after invading the pitch to re-enact a famous Diego Forlán goal.