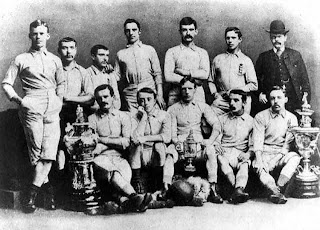 On 10 April 1886, Blackburn Rovers won their third straight FA Cup. It was only the second--and last--time any club won three in a row.

Founded in 1875, Rovers found early success in the FA Cup. They advanced to the Final in 1882 where they lost to Old Etonians, 1-0. After a Second Round exit in the 1882-83 tournament (which was won by local rivals Blackburn Olympic), Rovers returned to the Final in 1884 and 1885, winning both against Scottish side Queen's Park.

In the 1886 Final, they faced off against West Bromwich Albion. The two sides first met on 3 April at the Finals' usual venue, London's Kennington Oval, but played to a scoreless draw. West Brom proposed playing into extra time, but Blackburn declined, forcing a replay one week later.

The replay was held at the Racecourse Ground in Derby, the first time a Final had been hosted outside of London. A crowd of 12,000 watched as Rovers secured a 2-0 victory with goals from forwards Joe Sowerbutts and James Brown (who was also the team captain). Before then, the only team to win three consecutive FA Cups was London side Wanderers, who won the tournament in 1876, 1877, and 1888.

West Brom won the Cup two years later and have five FA Cups total. Blackburn meanwhile, went on to win it three more times for a total of six, with the last coming in 1928.
Posted by Brian Seal at 12:01 AM