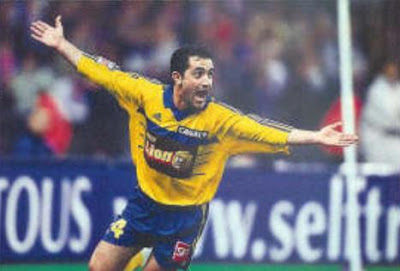 On 22 April 2000, FC Gueugnon became the first--and to date only--team from outside the top flight to win the Coupe de la Ligue, beating Paris Saint-Germain 2-0.

Founded in 1940, Gueugnon spent their first forty years as an amateur club. They eventually turned professional in 1980, earning promotion to Division 1 in 1995, but were relegated after one season. In Division 2 for the 1999-2000 season, they faced only one Division 1 team on their way to the Coupe de la Ligue Final, beating Strasbourg 2-0 in the quarterfinals.

In the final, they faced two-time winner PSG (who would finish the year in Division 1's second place). Playing in Paris at the Stade de France, PSG were a heavy favorite, but were unable to crack Gueugnon's defense. The underdogs seemed to gain enthusiasm with every minute as they stifled PSG's attack and, in the 65th minute, a 25-yard blast from Gueugnon midfielder Nicolas Esceth-N'Zi fell at the feet of teammate Marcelo Trapasso, who tapped it in for the go-ahead goal.

Gueugnon doubled their lead in the 90th minute when Sylvain Flauto (pictured), who had come on as N'Zi's replacement, turned a cross into the net. The whistle blew shortly afterward.

The win proved to be costly to Gueugnon, as they lost several key players to bigger clubs, including defender Sylvain Distin, who left for Arsenal. Gueugnon currently sit at the bottom of France's third division, the Championnat National.
Posted by Brian Seal at 12:01 AM