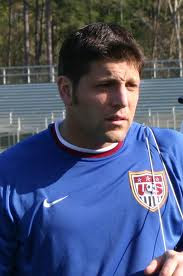 On 11 April 2006, goalkeeper Tony Meola returned to the US national team to earn his 100th cap after a four-year break.

Meola joined the national team in June 1988. Later that summer, he replaced Los Angeles Heat keeper David Vanole as the full-time starter and manned the posts for the US in the 1990 and 1994 World Cups. He captained the side for the 1994 tournament, including their dramatic 2-1 win over Colombia. His trademark ponytail made him the face of US football, but after the tournament, he decided to try out for the NFL's New York Jets as an kicker, then briefly pursued an acting career.

He returned to the national team in 1999, but had fallen to their third-choice keeper behind Brad Friedel and Kasey Keller. Although manager Bruce Arena--who had coached Meola at the University of Virginia--selected him for the 2002 World Cup squad, Meola did not see the pitch during the tournament.

In 2006, Arena recalled Meola to the squad for a friendly against Jamaica that ended 1-1. It was his last national team appearance, but it made him the ninth player, and the only goalkeeper, to reach the 100-cap milestone for the US.
Posted by Brian Seal at 12:01 AM