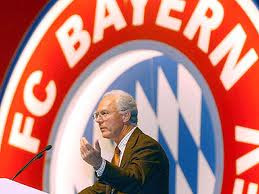 On 29 April 1996, Franz ("Der Kaiser") Beckenbauer returned to Bayern Munich for a second stint as manager and collected another piece of silverware in his two months in charge.

Beckenbauer, who won four league titles and three European Cups with Bayern from 1964 to 1977, originally returned to the club for the second half of the 1993-94 season. After lifting them to the 1994 Bundesliga title, he stepped aside as manager, handing the reins to Giovanni Trapattoni. Beckenbauer remained with the club as president.

Otto Rehhagel was their manager for the 1995-96 season, but despite some success on the pitch, he had a difficult relationship with the team's players, who considered his tactics and style to be too old-fashioned. Bayern cut ties with him in April 1996, just as the team was preparing to contest the UEFA Cup Final.

Once more, they turned to Beckenbauer, who took over for the last two months of the season. His first match in charge was the UEFA Cup Final, which ended as a 2-0 victory over Bordeaux. Bayern proceeded to win one and draw one of their last four matches to secure a second-place spot in the Bundesliga. Beckenbauer stepped down once again, and once again turned the club over to Trapattoni.