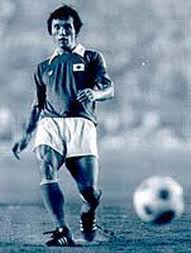 On 15 April 1944, 6-time Japanese league golden boot winner Kunishige Kamamoto was born in Kyoto. He was also the top scorer at the 1968 Summer Olympics, where Japan took the bronze medal.

Kamamoto joined the Japanese national team in 1964 while still a student at Waseda University. A striker, he started every match for them during the 1964 Summer Olympics, including a 3-2 win over Argentina in which Japan came back from a 1-2 deficit by scoring in the 81st and 82nd minutes. Kamamoto did not score any of Japan's goals in that tournament, but made up for it in 1968.

There, he opened Japan's campaign with a hat-trick in a 3-1 over Nigeria. After draws against Brazil and Spain, he then scored two more against France in the quarterfinals as Japan again won by a margin of 3-1. They were eliminated by eventual champions Hungary, 5-0, but proceeded to win the third-place match against hosts Mexico, 2-0, with Kamamoto providing both goals to finish with a tournament-high total of seven. He retired from international football in 1977 and remains Japan's top scorer with 75 goals in 76 appearances.