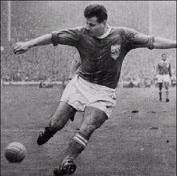 On 9 February 1931, midfielder Josef Masopust was born in Czechoslovakia. After leading the national team to a World Cup final, he was voted European Footballer of the Year and was later named the country's greatest player.

Masopust started his professional career in 1950 at the age of 19, signing with ZSJ Technomat Teplice. He played there for two seasons, then moved to ATK Praha (later renamed Dukla Prague) in 1952 and remained there for the majority of his career, scoring 79 goals in 386 appearances and winning eight league titles.

He rose to international prominence with the Czechoslovakian national team, earning 63 caps between 1954 and 1966. After a first-round exit in the 1958 World Cup, Masopust helped the team to a third-place finish at the 1960 European Championship, then reached the final of the 1962 World Cup. There, Masopust scored his only goal of the tournament to give Czechoslovakia a 15th-minute lead, though they went on to lose 3-1. Later that year, Masopust became the first Czech player to win the Ballon d'Or.

He continued to play until 1970 (spending his last two seasons in Belgium with Crossing Molenbeek), then moved into management, including spells with both Dukla Prague and the national team.

In 2003, when UEFA, in preparation for their 50th anniversary the following year, asked each of their member nations to name their best player of the past fifty years, the Czechs chose Masopust.