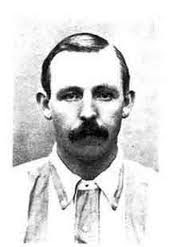 On 23 February 1901, Scotland opened the British Home Championship by getting their record margin of victory.

Ireland arrived at Celtic Park in Glasgow that day to face Scotland, who were the defending champions, but were completely unprepared for awaited them, as Scotland racked up 11 goals on the day--four from Celtic's Sandy McMahon (pictured), four from Rangers' Robert Hamilton, two from Celtic's John Campbell, and, for good measure, one from former Preston North End Invincible David Russell. Meanwhile, the Irish team were unable to breach the Scottish defense, so the match ended 11-0.

It was Scotland's biggest win, but it wasn't Ireland's worst result, as they had been beaten 13-0 by England in 1882. Scotland went on to draw their next two matches with Wales and England to finish as tournament runners-up (England won). Ireland finished last, losing all three matches.
Posted by Brian Seal at 12:00 AM