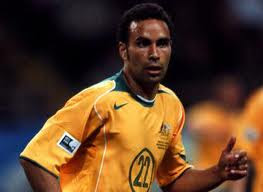 On 22 February 2006, Australia made their first appearance as a member of the Asian Football Confederation, beating Bahrain 1-3 in an Asian Cup qualifier.

Established in 1922, the Australian national team was a founding member of the Oceania Football Confederation, formed in 1966, along with New Zealand and Fiji. They were the federation's most successful team, but believed that the level of competition hurt their chances in major tournaments against teams from stronger federations--prior to 2006, they had qualified for only one World Cup, in 1974, which they exited in the group stage.

In 2005, the Asian Football Confederation issued a formal invitation for Australia to join, which the OFC executive committee endorsed unanimously. After FIFA's approval, the move became official in January 2006. In their first official match as an AFC member, played in Bahrain's National Stadium, they fell behind 1-0 thanks to a goal from Husain Ali (35'), but got goals from Archie Thompson (pictured) (53'), Josip Skoko (79'), and Ahmad Elrich (penalty, 87') to claim the win.

The increased level of competition had the desired result, as Australia went on to qualify for that year's World Cup and reached the Round of 16 before falling to eventual champions Italy, 1-0.