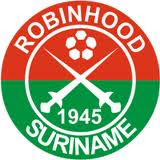 On 6 February 1945, SV Robinhood was founded in the Surinamese capital of Paramaribo. They have since become the country's most successful club, with a record 23 league titles.

The club was originally organized as a recreational outlet for the area's poorer citizens, which perhaps explains the unusual name, though no record of the reason survives. They joined the league in 1946, starting in the third division, and rose quickly through the ranks, winning the first of four consecutive titles in 1953.

They continued to accumulate silverware in the '60s and '70s, but really hit their stride in the '80s, winning the league nine times in that decade--every year but 1982, when they lost out to derby rival Leo Victor.

Robinhood won their most recent league title in 2012 and finished 7th out of 10 teams the last two seasons.