13 February 1960 - The Most Incorruptible Man In Italy 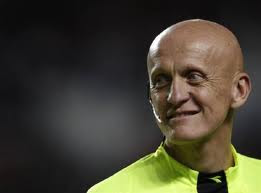 On 13 February 1960, Italian referee Pierluigi Collina was born in Bologna. A six-time World Referee of the Year award winner, he went on to officiate some of the sport's biggest events, including Champions League and World Cup finals.

He got his start as a referee in 1977 and quickly rose through the hierarchy, taking charge of Serie C1 and C2 matches in 1988. Three years later, he was promoted to Serie A and B matches. In 1996, he took charge of his first major final, overseeing the Olympic final between Argentina and Nigeria, then, in 1999, he refereed the Champions League final between Bayern Munich and Manchester United. He reached the pinnacle of his profession in 2002, when he was top official for the World Cup final between Brazil and Germany. Meanwhile, the IFFHS named him their World Official of the Year for six straight years, from 1998 to 2003.

Throughout his career, he remained above reproach, maintaining a high standard of professionalism and objectivity. When Italy was rocked by the 2006 match-fixing scandal, Collina's reputation was actually improved as police recordings of Juventus director Luciano Moggi, one of the primary conspirators, revealed that Collina refused to cooperate with any efforts to fix matches.

He retired in 2005, but continues to be involved in the sport, serving as an official for the Football Federation of Ukraine since 2010.
Posted by Brian Seal at 12:00 AM