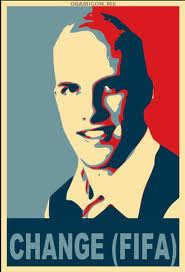 On 17 February 2011, American journalist Grant Wahl announced his candidacy for FIFA President, running on a platform of transparency and a pledge to clean up the global football authority.

When Wahl made his announcement, FIFA and incumbent president Sepp Blatter were the focus of extensive criticism in the wake of alleged bribery scandals and the controversial decision to hold the 2022 World Cup in Qatar despite concerns about the weather and the country's need to develop an extensive infrastructure in a relatively short period of time. The two leading candidates for president were Blatter, running for his fourth consecutive term, and Mohammed Bin Hammam, president of the Asian Football Confederation and FIFA Executive Committee member.

Wahl, a writer for Sports Illustrated, announced his intention to run on the Sports Illustrated website. He assured readers that his candidacy was serious and promised reforms including the use of goal-line technology and the public release of all of FIFA's internal documents. All he needed to become an official candidate was a nomination from any one of FIFA's 208 member associations.

Although his campaign received a tremendous amount of popular support (he got 95% of the vote in an online poll and garnered a swell of encouragement among both celebrities and grassroots supporters), he was unable to convince any association to nominate him. While several members told him they would support him if nominated (votes were taken by secret ballot), they declined to submit his name, because the nomination process was public and they feared reprisals from FIFA.

In April, shortly before the close of the deadline for nominations, Wahl ended his candidacy. Bin Hammam similarly suspended his own campaign, leaving the unopposed Blatter to win his fourth term.
Posted by Brian Seal at 12:00 AM