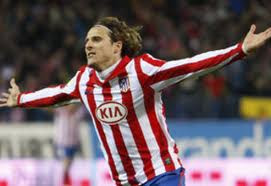 On 14 February 2010, Atlético Madrid did something no other La Liga team was able to do that season--beat Barcelona.

It was a result few could have anticipated. Barcelona were at the top of the league table, unbeaten on the season, while Atlético were in thirteenth, just six points above the relegation zone. When the two teams met earlier in the season at Camp Nou, Barça cruised to a 5-2 victory.

But after only eight minutes in Madrid, striker Diego Forlán (pictured) put the hosts up 1-0 after picking up a pass from José Antonio Reyes and putting it past Barcelona keeper Victor Valdes. Fifteen minutes later, Atlético doubled their lead with a free kick from Simão, taken at the edge of the box.

Despite going down 2-0, Barcelona quickly regained their composure, getting a 27th-minute goal from Zlatan Ibrahimović. Later, the Swede had two opportunties for an equalizer, but was twice denied by keeper David de Gea. The young Spanish keeper also stopped a shot by Lionel Messi near the break.

Barcelona's momentum had been rising at the end of the first half, but they could not maintain it in the second and the match ended 2-1. As consolation, it was their only loss of the season which ended with the league title. Atlético, meanwhile, improved their own fortunes and finished the season in eighth place.