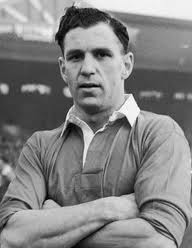 United were the defending cup holders, then in their fourth season under manager Matt Busby. Non-League side Yeovil Town had done an impressive job just to make it to the Fifth Round meeting against United, having advanced with wins over Romford (4-0), Weymouth (4-0), Division Two side Bury (3-1), and Division One side Sunderland (2-1, aet).

But that's where their good fortune ended, as they ran into a buzzsaw against United. Playing at Maine Road (because Old Trafford was still unusable after being bombed in World War II), the Red Devils destroyed the Glovers with Rowley's five goals, two from Ronnie Burke, and one from Charlie Mitten. The 8-0 margin is United's best in the FA Cup and Yeovil Town's worst across all competitions.

Manchester United went on to beat Hull in the next round, but fell to Wolves, the eventual winners, in the semifinals. Rowley left United in 1955 as the club's leading scorer with 211 goals in all competitions, though that total was later passed by Wayne Rooney (currently at 250), Bobby Charlton (249), and Dennis Law (237).
Posted by Brian Seal at 12:00 AM