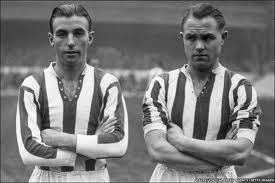 On 4 February 1937, Stoke City recorded their record league victory, beating West Brom by the score of 10-3. It is also West Brom's record loss.

The teams met at Stoke's Victoria Ground separated by six spots in the table, with Stoke in fourteenth and West Brom sitting in twenty-first, only one place above the bottom. Their previous match ended as a 2-2 draw, so few people expected what happened next.

Powered by their star forward Stanley Matthews (pictured, left), Stoke took the lead in the 10th minute (scored by Freddie Steele (pictured, right) from a Matthews cross), but West Brom equalized one minute later. They scored again in the 20th minute and never looked back. Steele converted a 32nd-minute penalty to extend the lead to 3-1, then scored again to push the lead to 4-1 by the break.

In the second half, Stoke continued to surge and were up 5-1 before West Brom got their second goal. But Steele continued to torment the Baggies, scoring twice more to push the score to 7-2 en route to the final score of 10-3. While that remains a record margin in the league, it is a distant second to their 26-0 win over Mow Cop in the Staffordshire Senior Cup in 1877.

Steele went on to score a club record 33 league goals that season, part of his career total of 140 in 224 league appearances.
Posted by Brian Seal at 12:00 AM