2 February 2011 - Corinthians Get The Tolima Take-Down 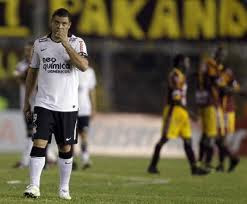 On 2 February 2011, Brazilian giants Corinthians were dumped out of the Copa Libertadores in the first round by Colombian side Deportes Tolima.

The two sides met over two legs and played the first one to a scoreless draw in São Paulo on 26 January. One week later, they reconvened at Tolima's Estadio Manuel Murillo Toro to decide the contest. There, playing before a crowd of 15,000 the hosts took control of the match early and were denied a quick lead only by the brilliant play of Corinthians goalkeeper Júlio César and the referee's decision not to award what looked like a certain penalty for an 18th-minute foul by Corinthians in the box.

Corinthians did better in the second half, getting a great chance in the 50th minute with a powerful blast from striker Ronaldo (pictured), but Tolima keeper Anthony Silva managed to parry it. They then fell victim to a controversial goal on a Tolima counterattack in the 66th minute when forward Danny Santoya beat César after getting the ball in a marginally offside position.

Tolima's second goal left no room for doubt, however, as unmarked striker Wilder Medina connected on a cross and headed the ball home. The 2-0 loss continued Corinthians' frustration in the tournament, which they have never won. Tolima advanced to the group stage, but were eliminated there.