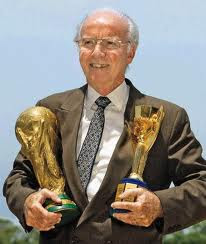 On 9 August 1931, future Brazilian legend Mário Zagallo was born in Maceió. He went on to become the first person to win the World Cup as a player and a manager.

Nicknamed "the Professor," he spent his entire club career in Brazil, first with Rio de Janeiro club America FC (1948-49), then with Flamengo (1950-58) and Botafogo (1958-65). Although small at 1.67 meters (5'5"), he was a skilled midfielder with an instinct for the attack and a willingness to race back on defense. He rose to international fame with Brazil in 1958 when he played every minute of their World Cup campaign and scored in their 5-2 victory over Sweden in the final. He repeated that performance in 1962 as Brazil lifted their second World Cup.

He retired as a player in 1965, but took up management one year later, starting with Botafogo. He briefly managed Brazil in 1967-68, then returned in 1970 in time for the World Cup. Although his style was criticized as too rigid and defensive, his Brazil squad won all six matches, including the final over Italy, to make Zagallo the first man in history to win the tournament as a player and a manager (to date, only Franz Beckenbauer has matched that accomplishment).

After taking Brazil to a fourth-place finish in 1974, Zagallo left the national team and began a coaching journey that took him across Brazil and the Middle East. He returned to the national team in 1994 as an assistant to Carlos Alberto Parreira and again Brazil took the trophy. He replaced Parreira in 1998 and guided Brazil to another World Cup Final, but lost to France.

He retired in 2001, but remains a constant presence around the Brazilian national team.