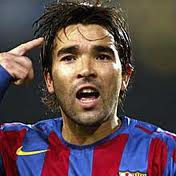 On 27 August 1977, Anderson Luís de Souza, better known as Deco, was born in São Bernando do Campo, Brazil. A star for Porto, Barcelona, Chelsea, and the Portuguese national team, the midfielder was named the UEFA Club Footballer of the Year for the 2003-04 season.

His time in Portugal led him to become a citizen and play for the Portuguese national team after he was not selected for Brazil. He went on to make 75 appearances for Portugal between 2003 and 2010.

When Porto manager José Mourinho left for Chelsea in 2004, Deco was rumored to follow him, but instead signed a four-year deal with Barcelona. There, he continued his winning ways, adding two La Liga titles (2005, 2006) and another Champions League trophy to his silverware collection.

In 2008, he finally moved to Chelsea to play for new manager Luiz Felipe Scolari. Although the club was successful, winning two FA Cups (2009, 2010) and the Premier League (2010), Deco was unsettled and unhappy in London. In 2010, he moved back to Brazil to play for his current club, Fluminense.