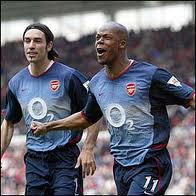 On 24 August 2002, West Ham drew with Arsenal at Upton Park, ending the Gunners' bid to set a new English record winning streak. Instead, Arsenal had to settle for a top-flight record.

The match was the second of the season for both teams, but Arsenal had enjoyed a strong finish to the previous season, winning their last 13 league matches to run away with the Premier League title. They also won their season opener in 2002, at home against Birmingham City, to match a 14-game winning streak set by Manchester United in 1905 and repeated by Bristol City in 1906 and Preston North End in 1951.

Each of those earlier streaks, however, occurred in the Second Division, so Arsenal had already taken the top-flight record for their own. They hoped to extend the run, though, and hold the sole record across England. Unfortunately for them, West Ham were standing in the way.

Playing before a crowd of over 35,000 at Upton Park, things looked grim for the visitors as West Ham built a 2-0 lead on goals from Joe Cole (44') and Freddie Kanouté (53'). Arsenal pulled one back with a sensational Thierry Henry strike in the 65th minute, but West Ham appeared ready to restore the margin after the referee awarded them a penalty for an Ashley Cole foul on Joe Cole. Fortunately for the Gunners, keeper David Seaman saved Kanouté's attempt.

In the 88th minute, just as it looked almost certain that Arsenal were going to suffer their first league loss in almost eight months, striker Sylvain Wiltord (pictured, right) delivered a 14-yard shot to draw the Gunners level.

Arsenal finished the season in second with a record of 23 wins, 9 draws, and 6 losses, while West Ham ended in 18th place and were relegated.