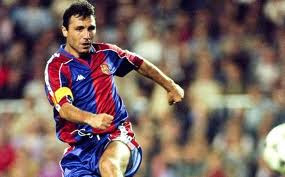 Barça won the first leg at Zaragoza by the comfortable margin of 0-2. The second leg, though, was a much tighter affair. Playing before a crowd of 70,000 at Camp Nou, Zaragoza took an early lead with a 10th-minute goal from defender Alberto Belsué, who blasted the ball right over Barcelona keeper Carles Busquets (father of current Barcelona player Sergio Busquets). Neither keeper looked very impressive, as Zaragoza's Andoni Cedrún misplayed a ball three minutes later to concede a goal from Barcelona winger Txiki Begiristain.

Things got worse for Busquets as Zaragoza evened the aggregate score at 3-3 before the break with goals from striker Juan Esnáider (32') and Francisco Higuera (33'). But Barcelona pulled ahead in the second half with a brace from striker Hristo Stoichkov (pictured) (50', 69').

Higuera scored again in the 77th minute after Busquets misplayed another ball and left him with an open goal, but Cedrún committed a similar error at the other end, allowig Txiki an uncontested strike in the 87th minute. Higuera completed his hat-trick two minutes later to win the second leg 4-5, but it was small consolation as Barça took the trophy.

It was the eleventh trophy for Barcelona manager Johan Cruyff, a record haul that was surpassed only recently by Pep Guardiola, who appeared as a substitute in that match. Guardiola's twelfth trophy came in August 2011 when Barça beat Porto in the UEFA Super Cup.