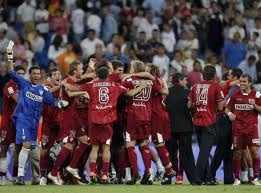 On 19 August 2007, Sevilla won their first Supercopa de España, destroying Real Madrid at the Bernabéu to win 6-3 on aggregate.

Sevilla, the 2007 Copa del Rey and UEFA Cup winners, hosted the first leg on 11 August and scraped out a 1-0 victory thanks to a 27th-minute penalty kick from striker Luís Fabiano. The second leg was hosted by Real Madrid, the 2007 La Liga champions.

A crowd of 69,000 turned out at the Bernebéu and were stunned to see Sevilla increase their aggregate lead in the 16th minute when a scramble in front of the Madrid goal allowed forward Renato to knock the ball home. But just seven minutes later, Madrid midfielder Royston Drenthe beat Sevilla keeper Andrés Palop with a rocket from over 35 yards out.

In the 37th minute, a Madrid handball led to another Sevilla penalty, converted by striker Frédéric Kanouté, who had missed the first leg. Madrid surged back to take a 2-3 lead on the day with goals from Fabio Cannavaro (44') and Sergio Ramos (78'). The 3-3 aggregate score would have seen them take the cup on the away goals rule, but Sevilla pulled away with three late strikes from Kanouté (80', 89') and Renato (88') to claim the victory.

Real Madrid eventually sorted out their defensive woes, giving up the fewest goals in the league en route to the 2007-09 La Liga title, while Sevilla finished fifth that season.